The Countdown Is On

The wait is almost over! 31 days until I fly out to the states on an adventure of a lifetime.
I’m sorry for the lack of posts & updates lately but I have been so busy planning our wedding/working & attending social activities that I just haven’t had the time to put any words down.
But I promise in the future I will be making more frequent posts/updates (especially while I’m away).
I also have a few DIY craft projects coming up so ill make sure i pop those up as well.

Today I started heavily researching New York as it’s the first stop on the trip & I want to make sure that I experience everything the Big Apple has to offer . I don’t just want to just go to your typical tourist spots & food chains. I also like to experience the amazing food on offer which will include many bagels, pizzas & doughnuts. I have even discovered a cool Coffee shop that is run by 2 Australian guys which is called ‘Two Hands’ so I know at least I will get one cup of decent coffee while im away (sorry everyone but I must admit I don’t have much faith in American coffee)…..From the previous experiences i have had lets just say it was pretty bad.

I have actually compiled a spread sheet listing places to eat/see/drink ect… and their areas in NYC so if anyone else is heading to New York in the future & is keen for some tips hit me up/send me a email & id be more than happy to send you through a copy.

I honestly feel that 6 days isn’t going to be enough in this amazing city. But I plan to hit it hard & save the rest/sleep in period for when we are in Boston/Syracuse. Don’t get me wrong these places have some great things to see & do as well. But they are going to be nothing compared to NYC as they say its the city that never sleeps.

We also recently got our new walking shoes & have started to break them in & I’m honestly in love. Its like walking on clouds. For those of you who travel or walk a lot I would recommend the Skechers GOwalk range. They are so light weight & comfortable. The best part is that you can just chuck them in your washing machine when they get a bit smelly/dirty. Which I imagine I will need to do regularly over our 6 week journey. 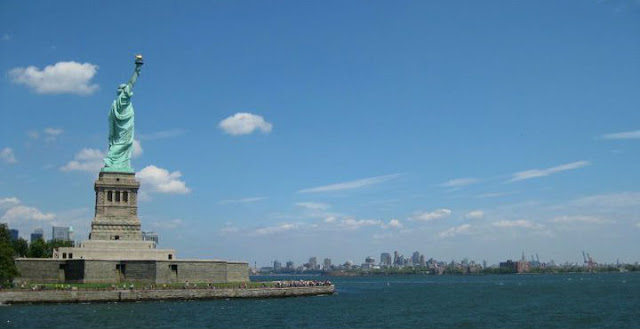 My First Trip To Rottnest Island

Can you believe that I have lived in Western Australia for over 15 years now & still had never been to Perth's beloved island? Me neither. But last weekend I FINALLY made it for the very first time & now I have simply fallen in love with the place (especially because of my new found spirit animal the Quokka).


I definitely have plans to go back soon & stay for a weekend so I can explore it a bit more.
Here is a few pictures of my brief visit to Rottnest Island. 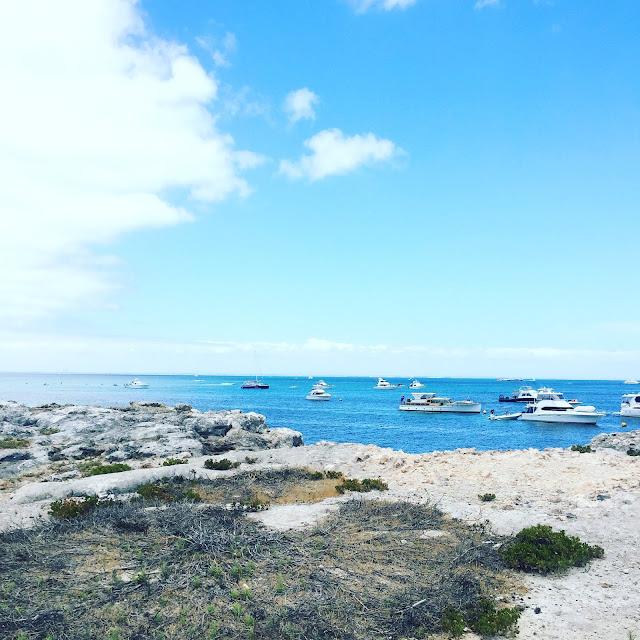 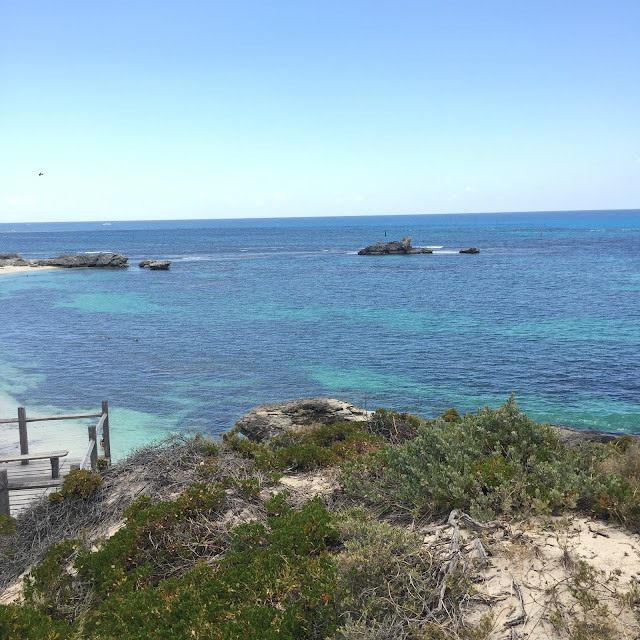 I'll definitely be back to go snorkelling here 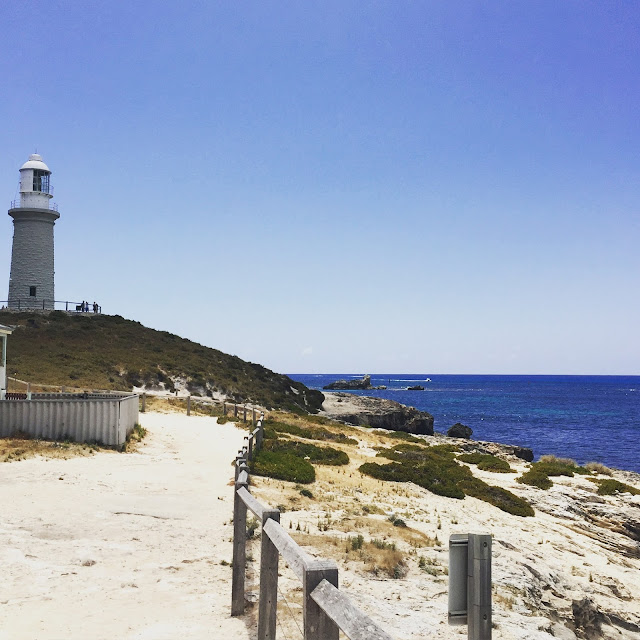 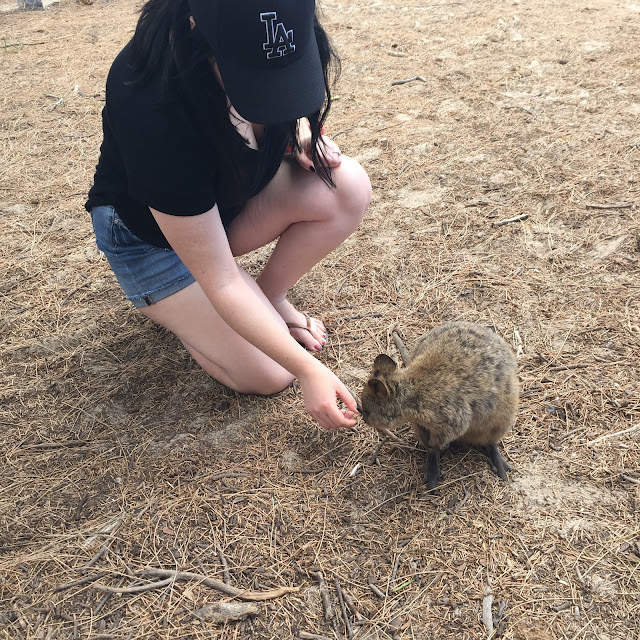 Meeting the cutest residents on the island﻿﻿ 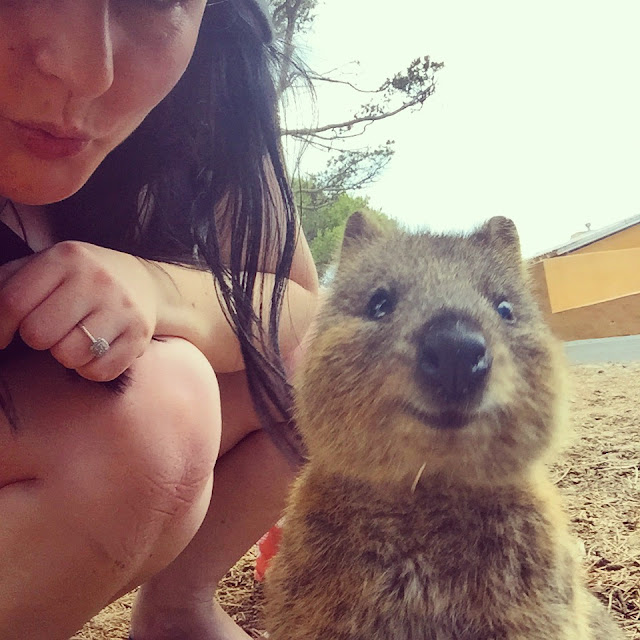 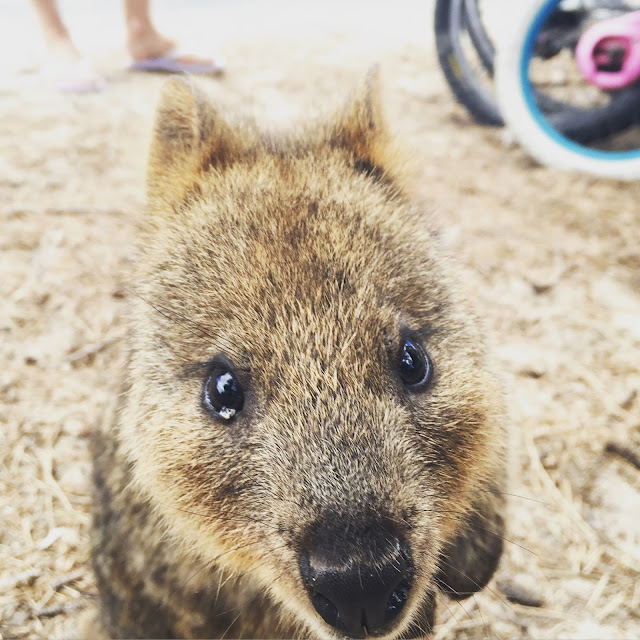 The sweetest face around. I just wanted to take him home with me.﻿﻿ 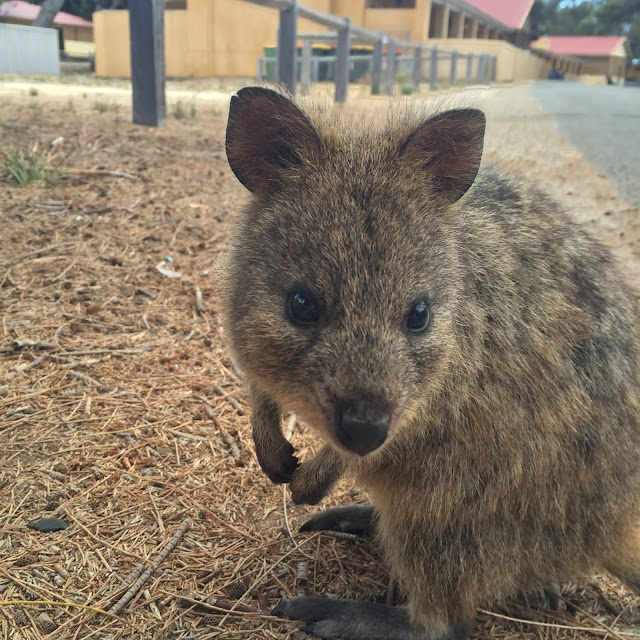 I named him Barry the quokka. These guys are literally the cutest & happiest animal on the planet.

Thanks for a great afternoon Rottnest. Ill be back very soon.
xxxx

Hi guys & welcome to another fun filled year ahead.
Can you believe its 2016 already? I'm super excited as so many wonderful things are happening this year & i cannot wait to share it all with you. Most importantly our road trip across America.

Its sad to think that the silly season is over again for another year & i hope that those of you who got time off over this period (sadly i was not one of them) had a nice relaxing break & are ready to get back into it tomorrow.
How did you spend your last day?
I grabbed a coffee from Foam Coffee Bar in Leederville before heading down to the beach at Cottesloe to join some friends for a picnic. Nothing but blue sky & ocean. Perfection! 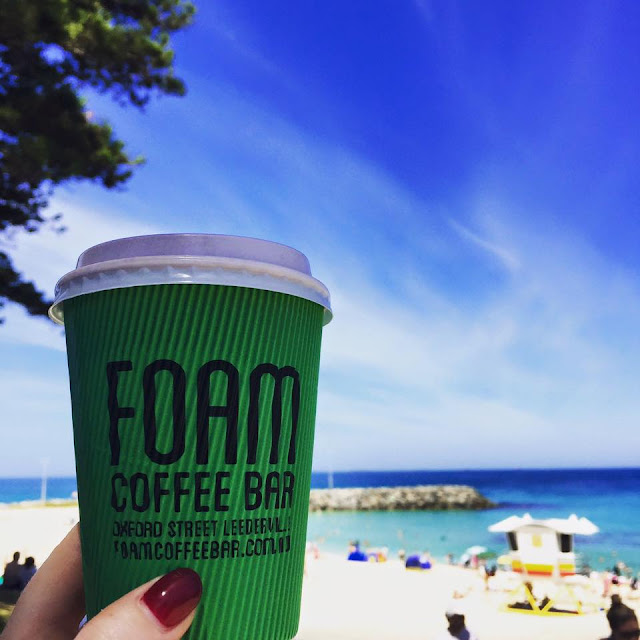 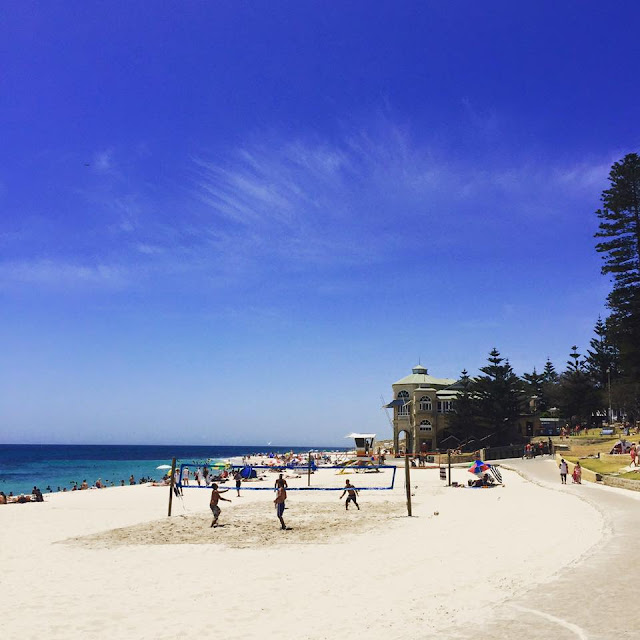 So these last few weeks have been pretty amazing I must say. Especially since I got to go on a last minute trip to Adelaide for a long weekend & see TAYLOR SWIFT!!!. 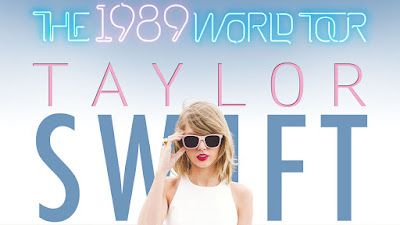 But let me take you back for a moment so you can get the full gist of the story. For months & months i had been beside myself sad because Taylor Swift had decided to skip Perth this time for her 1989 world tour & decided to go to Adelaide instead to make up for the fact she had skipped Adelaide on her previous tour in 2013 (Which I attended at NIB Stadium, Perth).
I remember back in December 2014 I had considered buying 2x concert tickets as soon as they were released along with some cheap air fares to either her Melbourne or Adelaide shows, but I soon realised it wasn't feasible as I had just resigned from my job & was having a few months off before starting my new role & had to be smart about my spending + i had found that i had no Swifties (Taylor Swift Fans) in my friend group, So I held off & within a few days everything was sold out. Many tears were shed.

For the next few months I went through different emotional states. Sometimes it was just utter disappointment & others it was me telling myself that maybe im to old to like Taylor Swift (NEVER!!). But in the end I had to put on my big girl boots & accepted my fate. No concert for me (insert sad face emoji here). Come May Taylor's 1989 World Tour had begun & my Instagram Feed was flooded with updates with her performances from all over the world & not to mention surprise celebrity guests!! I used to have updates sent to my phone so i knew when she had posted up new photos. But after awhile i had decided to unsubscribe from this because i couldn't take the heartache anymore.

Then late on a Wednesday night i was at home researching our upcoming holiday & facebooking when i noticed a friend of mine needed to borrow a suitcase. Those who know me would know that if i can im always happy to help people out. So i texted my friend to see how she was & if she found a suitcase ok. Shortly after i received a text message back saying she had found a suitcase but now was terribly upset because her friend had cancelled her plans with her & now she would be going alone to Adelaide & alone to the Taylor Swift Concert. OMG!! This is my chance I thought to myself & mentioned to her that it was a long shot but I may be able to come & that id let her know by lunch time tomorrow. So the next day I went into work & explained my undying love for Taylor Swift to my boss & how I have the opportunity to now go & see her in Adelaide. And he was totally cool with it. BEST BOSS EVER!! But after searching for cheap flights it was starting to look like it wasn't going to be possible again so I had started to give up. Then by lunch time I had a email come through from my Fiancé saying Merry Christmas babe. He had booked and paid for my flights......lets just say there was a few tears of joy and an over whelming feeling of love and appreciation for my partner.

Anyway come the Sunday late afternoon I was boarding a plane to Adelaide & excited beyond my Wildest Dreams (get it......). I landed late Sunday night after a constant turbulent flight & arrived in the stinking 40 degree heat. I made my way to Glenelg to meet my friend at the backpackers & slept on the hardest bed I have ever laid on while listening to the man below us constantly coughing his guts up. But this did not matter. Tomorrow I would get to see Taylor Swift preform.
Monday morning I woke up early (mainly due to the overbearing heat & lack of aircon + the guy below us who is now missing a lung as he had coughed it up) & decided to venture out to the beach & get some breakfast. 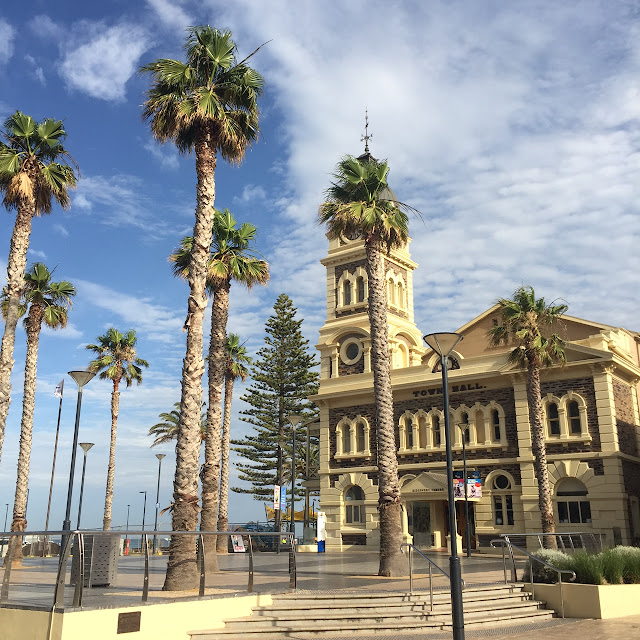 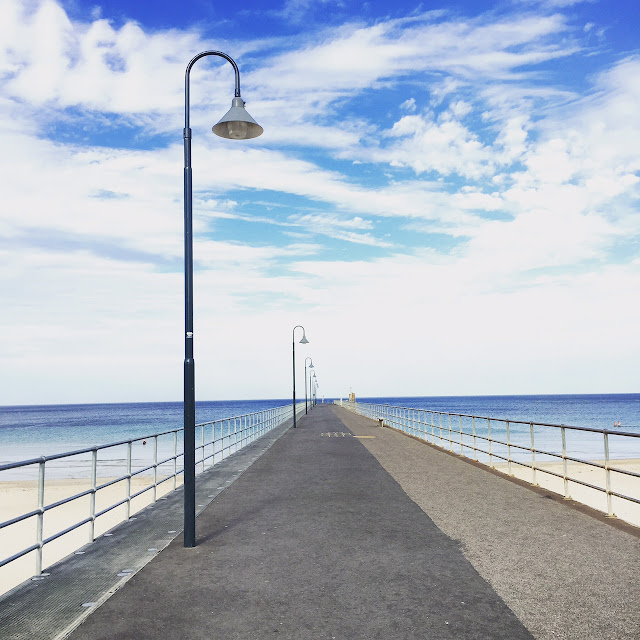 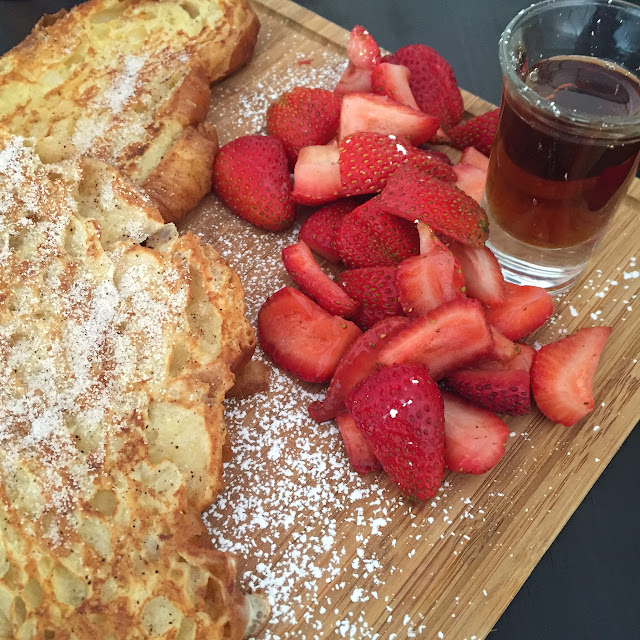 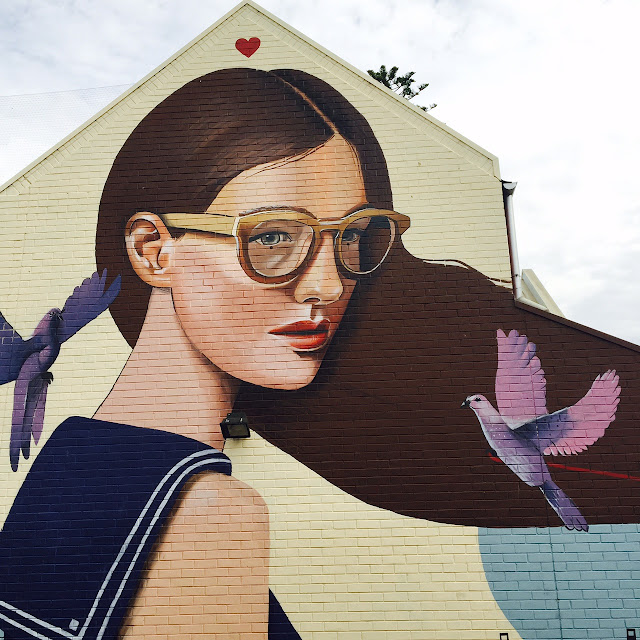 Even Adelaide Is Getting In On The Street Art Scene. 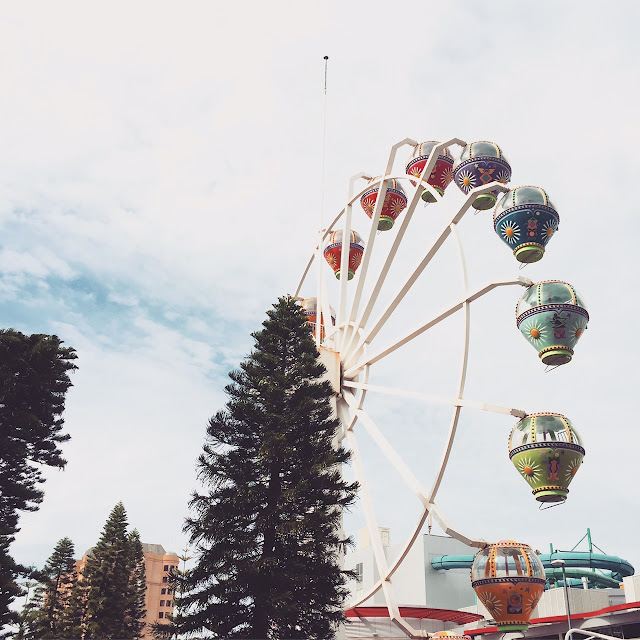 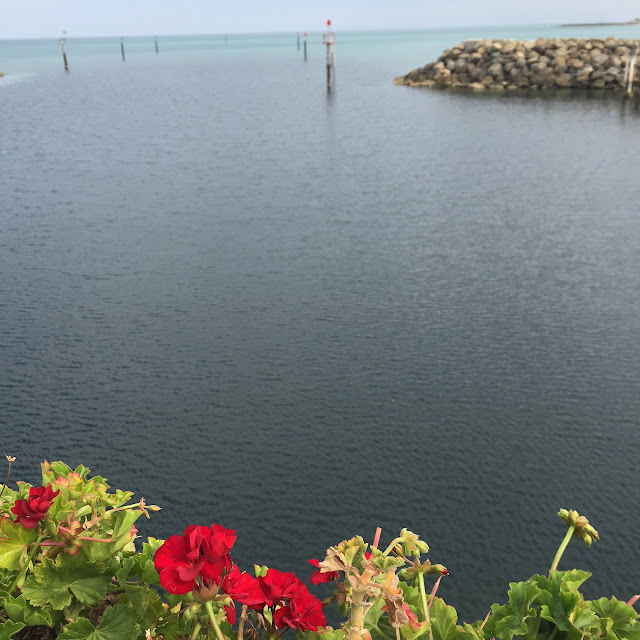 Once breakfast was over we packed up our stuff & headed into the Adelaide CBD where we would be staying for our last night & so it was closer for the concert. For the remainder of the day we just walked around the city for a bit and looked at shops & had some lunch. Then it was time to go back to the hotel to start getting ready (while listening to Taylor Swift of course). Soon after we hopped on the train with hundreds of other die hard Swifties. And finally we arrived AHHHHHHHHH.
From here on out please excuse the bad photography. My little phone can only take so much of me jumping around + bad lighting. But here is a few images to give you a little taste of the amazingness that was the 1989 World Tour. 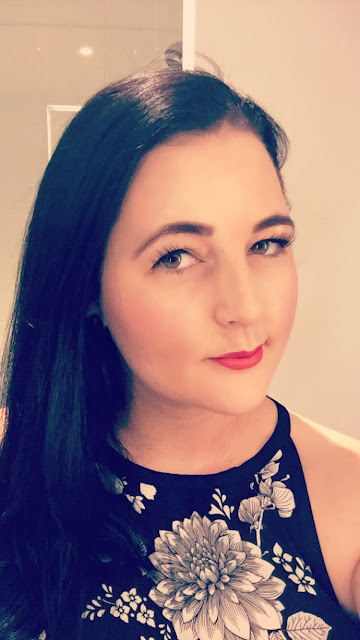 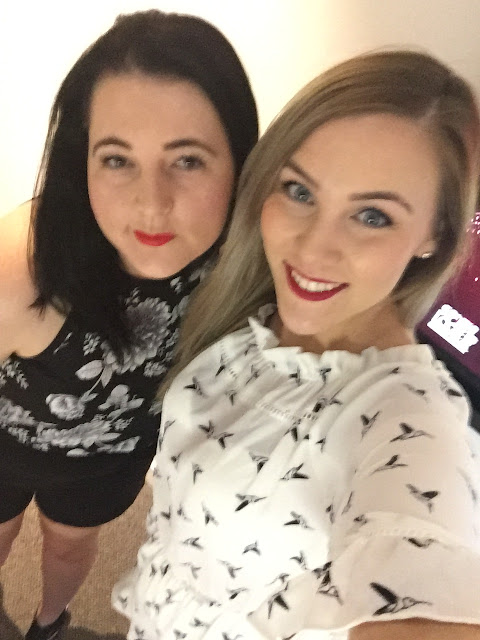 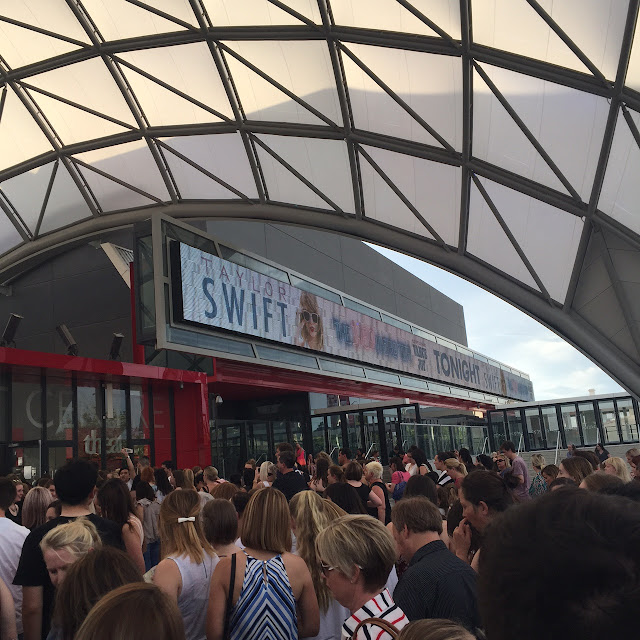 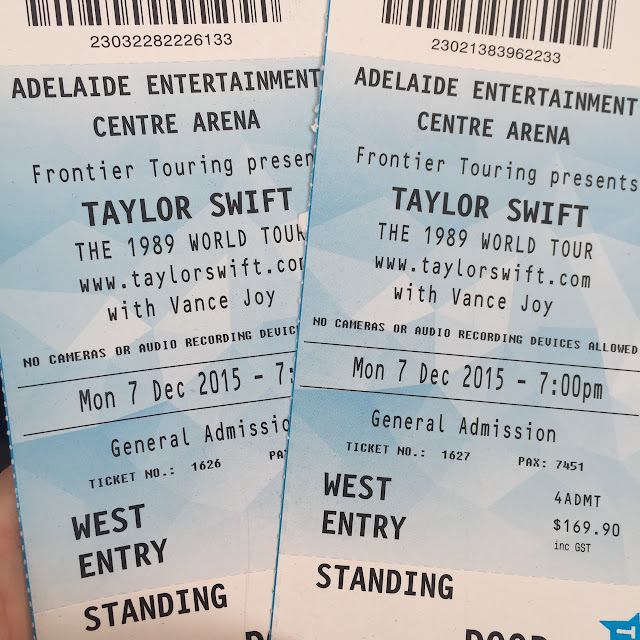 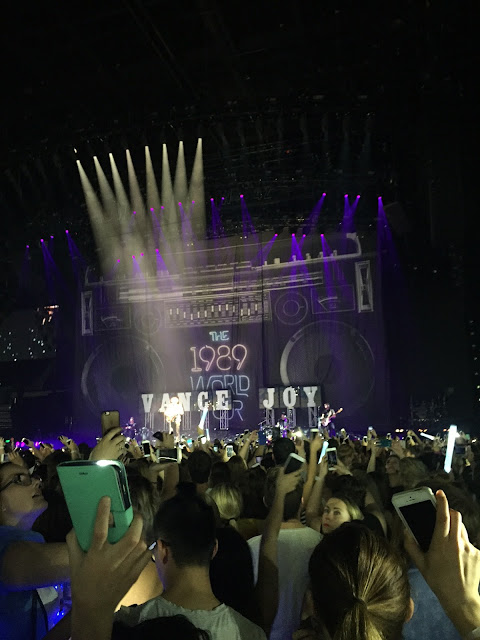 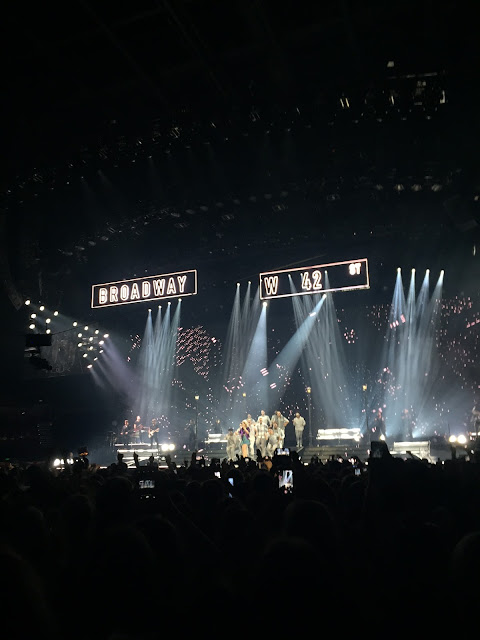 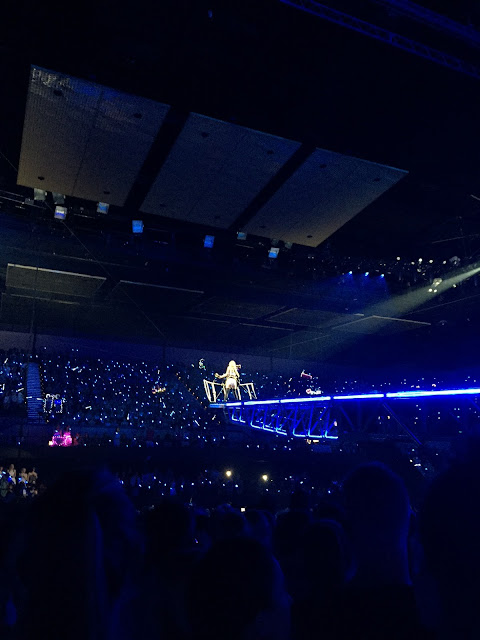 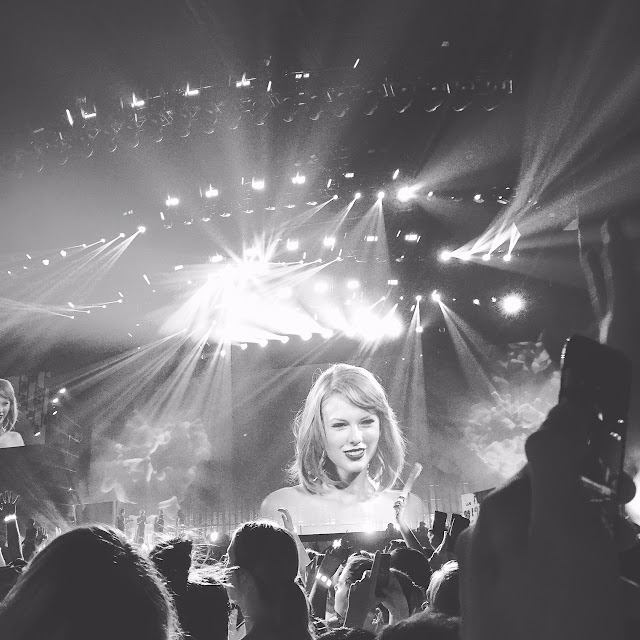 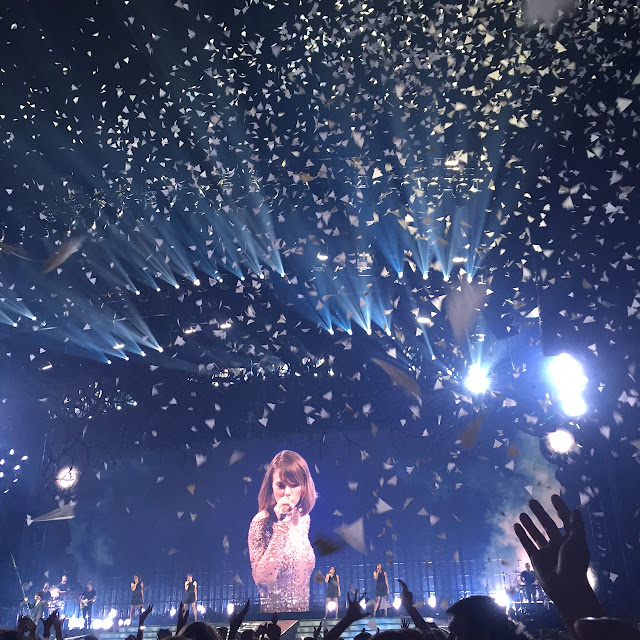 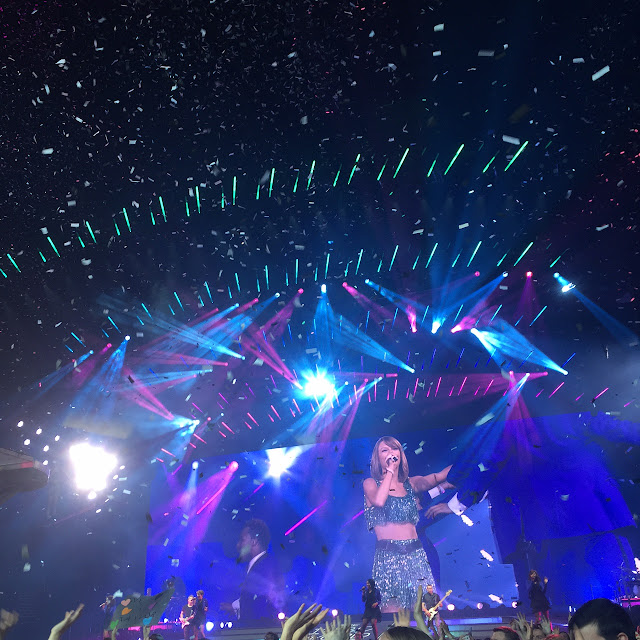 Once the concert had finished we were both on such a high & made our way back the the hotel.
Im pretty sure we both fell asleep that night with the biggest smiles on our faces.
Tuesday morning i woke up wearing my 1989 World Tour T-shirt knowing it wasn't a dream ha ha.

I then got ready & boarded my plane back home to Perth.

But i will leave you with this. I regret NOTHING & my love for Taylor is more strong than ever. And im not afraid to admit it.
Kriddy Howard Unknown at Saturday, December 19, 2015 No comments:

So as many of you may know I'm a HUGE fan of all things Kmart these days so its only natural that i shop there for my Christmas Tree & most of my decorations.
And I'm so in love with it that i just had to share it with you all.
I know its not the normal traditional style of tree, but hey when i get the chance to be creative i damn well get creative. 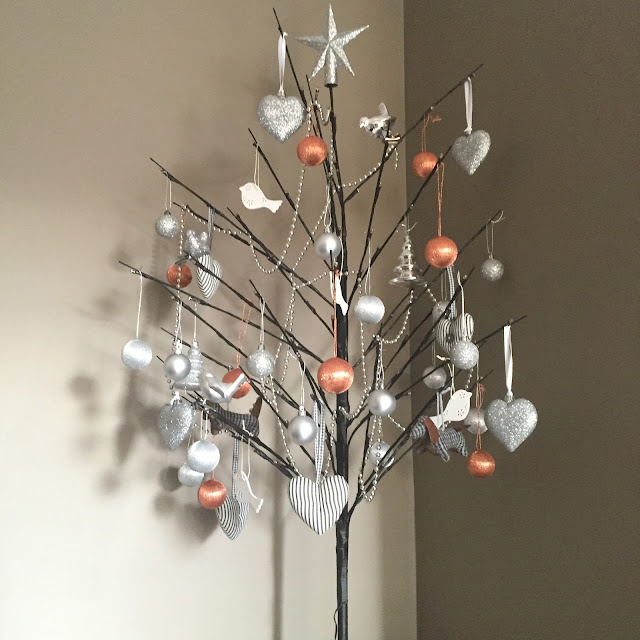 Sorry i know the photo quality inst the greatest....but you get the idea. 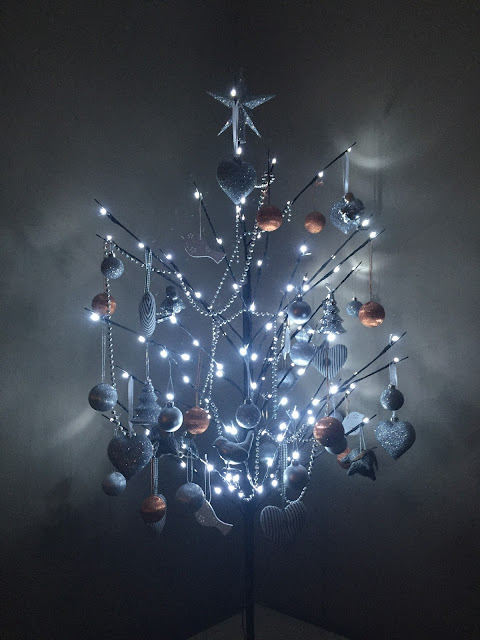 I added a bit of Copper in this year to make it more on trend. You may also notice i have to little sausage dogs on there as well. Naturally i have to have something representing my two fur children.

Next step is to organize the Christmas Presents to go underneath.
Which means im going to have to fight the crowds & Christmas Carols on repeat in the Shopping Centers......Urgh. 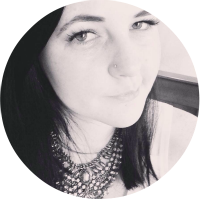 This page is to keep you updated on my adventures & creative inspiration.

© All images and text belong to me unless otherwise stated. If you are looking to use my images on your blog/publication please contact me prior & link them back to me.